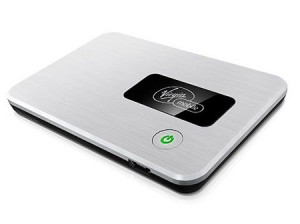 I did find it difficult to get a signal while inside the conference rooms at WordCamp Baltimore last month, but I’ve gotten pretty good coverage everywhere else I’ve used it. I have actually gotten into the habit of watching shows on Hulu since making the switch to the MiFi device. Occasionally the buffer empties out and the video starts to stutter, but most of the time it does pretty well.

While I didn’t download any huge files (like DVDs or anything) over the last month, I did use the service pretty heavily and never had my service capped or limited as a result; so it would appear that the service really is unlimited. The Virgin Mobile account administration area does keep a log of how much you’ve used the service, but, in my case, the log is supposedly 57 pages long, so it’s difficult to see exactly how much data I used during the month. It appears, though, that I used approximately 7 gigabytes of data during the month of September.

So, with all of that said, I am still extremely impressed with the performance of the MiFi 2200 on the Virgin Mobile unlimited Broadband2Go plan.

However, I did run into an issue when trying to renew my plan for the month of October. I bought a Virgin Mobile Top-Up card on Sept. 30 and added it to my Virgin Mobile account. I expected that my account would automatically renew itself when the first month of service expired on Oct. 1. Unfortunately, however, it didn’t. On top of that, there were no options in my account control panel to renew my service manually. The control panel indicated that I had a $40 available cash balance (the value of the top-up card I added), but there was no way to apply that cash balance to my account or to purchase another month of service.

I contacted Virgin Mobile through its website on Oct. 1, and posted the question to them on Twitter on Oct. 2. On Oct. 4, I received an e-mail response closing my support ticket, and telling me that I needed to provide my account number (which I did in my initial request) and my PIN (which I did not in my initial message). I also received a response on Twitter. The Twitter account holder indicated that they would pass my situation onto the MiFi team for more support.

After I had still not gotten my situation resolved on Monday evening, I called the technical support phone number that had been included in my e-mail response. I was able to get the issue resolved in a matter of a few minutes over the phone.

Once my issue was resolved, I asked how I could avoid this situation when my account expires again next month. The person on the phone indicated that this was a known issue, and that they were working on resolving it so that I shouldn’t experience this problem again.