Around 2:30 p.m. yesterday afternoon, (just a few hours after I finally cancelled my satellite Internet service), my access to the Internet through my Virgin Mobile MiFi device stopped working. After trying to restart the device a few times and doing some other troubleshooting, I decided to call Virgin Mobile to see if they knew what was happening.

When I finally got through to a technician (around 3:15), they told me that they were aware of the outage and that I should try connecting again in about four hours. We still went ahead and tried it throughout the rest of the day anyway without any luck. By 9 p.m. last night, it still wasn’t working, so I decided to call back and ask for an update. The Virgin Mobile technician told me they were still working on the outage and asked me to try again in about two hours.

By the time I went to bed around 11 p.m., the service still was not back up. It was back this morning when I woke up, though, so they did get it fixed sometime overnight. Still, though, the outage lasted for at least 8 hours, possibly quite a bit longer.

During this outage, the only access I had to the outside world (the Internet) was through my wife’s Blackberry. I stole it away from her on occasion to check Twitter, but that was about all I was able to do. 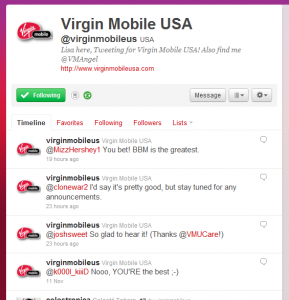 The thing that bothers me the most about this issue is not the fact that it happened, but that Virgin Mobile seems to have been so quiet about it. After seeing a few other people on Twitter talk about the issue, it seems that the “try again in [2 or 4] hours” was simply a company line that basically translated to “we don’t know what’s going on or when it will be fixed”. The official @virginmobileus Twitter stream was completely and totally quiet throughout the outage, as well; almost as though they couldn’t access the Internet, either.

Were you affected by the outage? I know that, at the very least, many people on the east coast were affected. I’m curious how far this outage spread.

It also seems that Sprint devices were unaffected by the outage. Therefore, even though the Broadband2Go system works on the Sprint network, it must have been localized specifically to the Virgin Mobile users.

Of course, if I still had my iPhone, I would have been able to blog about this while it was happening. The good news is, my Windows Phone is scheduled to be delivered today, so hopefully I won’t be quite so cut-off from the world if this ever happens again.