Chrome for Linux Moving Along 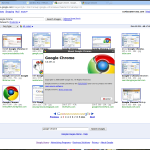 Within the last few days, the development build of Google’s Chrome Web browser has made great strides toward being ready for prime time use. Within Linux Mint, at least, the browser supports plugins such as Adobe Flash fairly well, the ability to import bookmarks, history, passwords and other information from Firefox has been implemented and is working properly, and the chrome (the appearance of the window – not to be confused with the name of the browser) is now consistent with the Windows version. When maximized, the tab bar moves into the area normally used as the title bar by other programs, allowing you to use almost as much of the screen as you would in fullscreen mode with other browsers.

If you are running some version of Linux on your computer and you have not yet tested the development build of Chrome, you really should check it out. At this point, the only real issue I am experiencing is that it’s difficult to enable the plugins. I had plugins working properly for a while, but then had to make some adjustments to my Flash installation, which stopped the plugins from working within Chrome. I’m assuming, though, that once the plugins are officially supported by Chrome, they will begin working properly (which will, hopefully, be very soon).