After using an iPhone 3G for about 2 years, I gave it up last week. Then, this week, I picked up one of the new Windows Phone 7 devices (the HTC Surround). Following is a brief comparison of the two from my perspective. 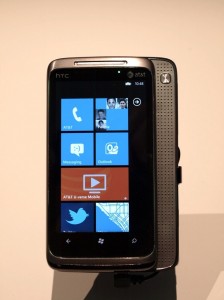 Both systems allow you to buy/download apps through your computer or through your device, so they are basically equal in that regard. I do think that the Windows Phone will need to find a better way to arrange and organize the apps and games once the marketplace starts to really take off, though.

One place the iPhone has the Windows Phone beat, hands-down, right now is the fact that you can’t view what apps you currently have on your Windows Phone when using your PC. You can only view and manage your apps through the phone.

The iPhone interface was revolutionary when it came out, but it’s become old after a while, and a lot of flaws have become apparent. It’s difficult to arrange the icons on your iPhone; there’s no real method of organization and it’s actually somewhat clumsy.

On the Windows Phone, it’s a little more simple (in my humble opinion; I am well aware of the fact that people will disagree with me vehmently). You have one home screen and can pin as few or as many apps to that home screen as you choose. Almost anything can be pinned to the home screen. If you need something that’s not pinned to your home screen, you tap an arrow and get to view the full list of apps on your phone. One minor complaint I have about this is the fact that there doesn’t seem to be a way to search for the apps you have installed (clicking the search icon while viewing your app list takes you to Bing to search the Web).

I realize this is probably an argument similar to the old VHS vs. BetaMax (if you’re old enough to remember that) or, a little closer to my heart, the Sega Dreamcast vs. Sony Playstation 2 argument; but the Zune media player interface is superior to the iPod/iPhone interface. Everyone I know that’s tried a ZuneHD and an iPhone/iPod has said they think so. The iPhone/iPod is so ingrained in the world culture, though, that it will probably forever beat the Zune/Windows Phone simply because of that fact.

That said, the Windows Phone does everything the ZuneHD does, and it does it just as well. The interface is extremely simple to use and works beautifully.

One more thing the Windows Phone has, because it is integrated with the Zune interface, that the iPhone does not is the Zune Pass. If my kids are any indication of the way trends are moving in the world, people are buying less and less music to actually keep. They want to download new songs right now (note I said “songs” not “albums”; apparently nobody buys albums anymore), but in another few weeks they won’t even remember why they liked it in the first place. The Zune Pass is perfect for users like that. You pay one flat rate ($14.99/month or $149.99/year) and you can listen to as much music as you want for a month. When that month is over, you can download 10 songs to keep forever, and the rest basically get thrown in the trash.

If I were to add up all of the money my step-daughter has spent needlessly on iTunes buying songs that she listened to for only a few days; I guarantee the Zune Pass would have ended up being a better deal.

Another feature related to the buttons on the Windows Phone is voice command. When you’re using your Windows Phone, if you hold down the Home button for 5 seconds, a voice-recognition app will open. You can then speak a command such as “call Home” or “find restaurant” or something like that and the phone will attempt to interpret your command and take action on it. It’s not as cool as the speech-to-text features found on some Android phones, but it is still pretty handy.

The iPhone basically has one button (it also has volume up/down and the on/off button on top, but the Windows Phones have those same buttons). Everything else is handled through the touch screen. The one button/switch that the iPhone does have that the Windows Phone (at least the Surround) lacks is the switch that puts the phone on vibrate. Within Windows Phone, you have to press the volume button and then touch the ring/vibrate icon that appears on the touch screen.

While the mobile implementation of Internet Explorer is nice, it still lacks some fundamental features that are standard in all other mobile browsers. It does not support HTML5 or CSS3 at all, unfortunately. This means that, when viewing a mobile version of a website, you get the bland, standard mobile website instead of the nice, polished version of the site that you would see on the iPhone or an Android handset. This also means that all of the mobile Google apps work completely differently than they do on the iPhone. 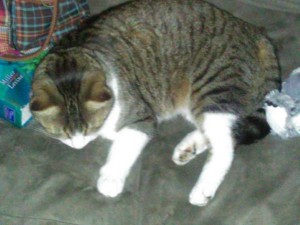 Unfortunately, since I never had an iPhone 4, I can’t comment on its camera. However, the 5 megapixel camera with an LED flash that’s included in the HTC Surround takes really nice pictures even in low light. The iPhone 3G took decent pictures in ideal conditions, but really stunk otherwise.

The photo shown on the right was taken in near complete darkness with the camera zoomed in about 50% (which, by itself, would have resulted in a terribly pixelated and blurry photo on the iPhone 3G).

On Windows Phone 7, after you take a picture, you can share the photo through MMS, e-mail (any of your accounts), Facebook or your Windows Live Skydrive (which appears to be like Dropbox on steroids – 25 gigabytes of storage space for free) account. If you have any photo-related apps installed on your Windows Phone, you can access them directly from the camera, as well. Simply touch the “extras” menu and it brings up a list of the photo apps (for instance, on my phone, I have the “flickr manager” app installed) and lets you use the photo in the app you select.

As you would probably expect by now, the Windows Phone beats the heck out of the iPhone in this category. You can add as many accounts as you want and you can choose to sync any or all of the following for each account:

If you choose to sync more than one calendar (for instance, I am currently syncing two different Google calendars and my unused Windows Live calendar), they will all be shown together (in different colors) within the native calendar app. Add an event or appointment to your calendar, select the appropriate account with which to sync and your appointment will be automatically added to that account’s calendar.

If you end up with multiple entries for the same person, that’s not a problem; simply click the little link icon on one of those contacts and the Windows Phone will show you a list of the other entries in your contact list that might match up. If the other entry you want to link is not shown in the list, you can search your contact list for the entry. Then, you just tell Windows Phone to link the two (or three or four or however many related entries you have) together, and they all then get merged into a single entry.

This is a feature that’s specific to the HTC Surround handset, but the speakers on that particular device blow the iPhone’s speaker(s) out of the water. The volume is really strong and the sound is crystal clear. Even with the volume turned all the way up, the sound does not distort; though it does get really loud.

Also, the HTC Surround (and, as far as I know, all other WP7 devices) uses a standard micro-USB plug to charge and sync the phone. With this device, you don’t have to worry about searching for the specific, proprietary cord (that can cost upwards of $30 each). My kids’ Samsung phones, my Virgin Mobile MiFi and my wife’s Blackberry all use the same micro-USB plug, so we can all share cords when necessary.

Another nice thing about Windows Phone 7 is the fact that you have a choice in which device you buy. You’re not stuck with only one choice (well, if you count the vaporware “white” iPhone, I guess you have two choices). If you don’t like the features found on the HTC Surround, you can go with the LG Quantum or the Samsung Focus and still stick with AT&T if you want. If you don’t want to stick with AT&T (another choice you don’t currently have with the iPhone), you can switch over to T-Mobile and buy the HTC HD7 or the Dell Venue.

Also, since the Windows Phone has the Zune HD interface integrated, you can set it up to sync your media over WiFi rather than physically hooking it up to your computer. Once you hook it up to your computer and configure the wireless sync feature (I am currently experiencing an issue getting this to work; but I think that’s related to my firewall settings), you never have to hook your phone into your computer again. You can easily drag and drop music, videos and photos to your phone within the Zune software; and it will automatically sync those items the next time you charge your Windows Phone (assuming it’s connected to the same WiFi network as your computer when you charge the device).

Finally, Windows Phone 7 has native MS Office integration (along with direct integration with Microsoft SharePoint 2010 if that matters to you). It’s not living up to its full potential yet (you can open Office documents that are attached to e-mail messages, but you can’t download or upload documents from/to SkyDrive, yet), but it does do a nice job of rendering the Office documents on a mobile screen, allows you modify and send/share them and doesn’t destroy the formatting in the process.

Is Windows Phone 7 better than the iPhone? That’s not really a question that I can answer. It really comes down to what you want out of your mobile experience. If having over a million different apps from which to choose, using apps like Facetime or the Google Mobile interfaces, using copy and paste, syncing with a Mac or using iTunes is really important to you, then you should definitely stick with the iPhone. Likewise, the plethora of 3rd-party accessories for the iPhone currently puts the Windows Phone to shame and most likely will continue to do so unless the Windows Phone gains a lot of traction.

If the ability to sync multiple calendars at once, open, edit and share Office documents, keep up with your friends on Facebook, integrate your gaming experience with your Xbox Live account and use the Zune Pass sound like things that might be important to you, it might be time to pick up a Windows Phone 7 device.

I will be the first to admit that there are a lot of things I miss about my iPhone (I’ll be writing a post soon about the various iPhone apps I really wish were available for Windows Phone 7), but I really like my new phone and am extremely impressed with the implementation of its features.