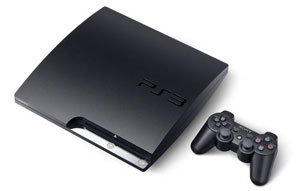 Apparently, Sony announced a new version of the commercially-struggling Playstation 3 console a few weeks ago. The new version is known as the PS3 Slim and will boast almost all of the same features as the original PS3. The new PS3 Slim will apparently be available on Tuesday, Sept. 1. At this time, only one version, a 120 gig model, of the PS3 Slim is being released. The new model will be priced at $299, nearly $200 less expensive than the cheapest version of the original PS3.

Yahoo! Plugged In gaming news reports that the new version of the console will consume 34% less electricity, be almost 4 pounds lighter than the original and is only about two-thirds the size of the original.

So, what’s the one apparent drawback of purchasing the PS3 Slim instead of buying the old mammoth version? The PS3 Slim will not include backwards-compatibility; meaning that you will not be able to play your Playstation 2 games on the new PS3 Slim. Will this make a major difference to consumers? Only time will tell. Microsoft caught a lot of flak when the Xbox 360 console was released with extremely limited backwards-compatibility.

However, the limited compatibility does not seem to have affected the sales of the 360 consoles for very long. However, the 360 was only Microsoft’s second foray into console gaming. Sony was lauded for allowing consumers to continue playing their original Playstation games when the PS2 was first released, and the backwards-compatibility was another big feature in the PS3. Recently, Nintendo has been very good about providing backwards-compatibility (at least one generation back) on all of their gaming machines. Until the Nintendo DS was released, gamers could continue to play all of their old portable Nintendo games (all the way back to the original Tetris cartridge that was packaged with the initial release of the Gameboy handheld) on any “Gameboy” device. Even with the Nintendo DS, although old Gameboy and Gameboy Color games were no longer compatible, the Gameboy Advance titles still worked extremely well. The Wii still plays all Gamecube games extremely well, allowing gamers to continue playing all of their favorite multi-player GC games when friends visit.

However, with the world of officially emulated games (Xbox Live, Wii’s Virtual Console, etc.) progressing at an amazing rate with large catalogs of great classic games available, and with gamers progressively wanting the latest and greatest games, I wonder if gamers will even notice that they can’t play their PS2 games anymore. The main reason behind gamers being so adamant about backwards-compatibility is the cost of upgrading their collection of games. With new PS3 games still running ~$60 each, a gamer’s collection is bound to take a while to rebuild for the new console. However, the PS3 has been out long enough that there should be quite a few “classic” and used PS3 games available at discount prices that the backwards-compatibility most likely won’t be nearly as important as it was when the console was first released.

It will be interesting to see if this move on Sony’s part helps Sony catch up in the console wars.

Image courtesy of Yahoo! Plugged In.