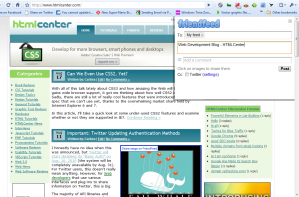 I’ve included a screen shot of the Friendfeed bookmarklet in action (actually, in this particular case, I’m using a Chrome extension that acts as a wrapper for the FF bookmarklet, but it functions exactly the same way). As you can see, it becomes part of the active window, as mentioned above. It doesn’t open in a new window. You can also see that one of the images on the page (my cursor was placed over the image, but my cursor wasn’t captured in the screen shot) has a thick blue border around it and includes a tooltip that says “Share this image on Friendfeed”.