This morning I attended Amazon’s Executive Cloud Computing Workshop. I was able to snap some photos and jot down some notes I’d like to share. The presenters included Werner Vogels – VP & CTO at Amazon.com and Marten Mickos – Sun SVP. I very much enjoyed Werner’s discussion – he basically took us on a tour of the history of AWS (ec2, s3, etc) and some examples of how customers are utilizing their cloud infrastructure services.

Werner explained that using Amazon web services (AWS) helps companies move from capital expenses to variable costs. The basic idea is that instead of buying enough hardware to make sure you can handle spikes, AWS can grow and shrink as needed.

Here you can see how fast AWS is growing and how in mid-2007, AWS bandwidth passed the bandwidth used by Amazon itself. Werner said if they showed 2008 on the chart, the Amazon line would be gone as the growth has been that big. In fact, he said that Amazon’s ecommerce sites combined is only a moderate customer of AWS. 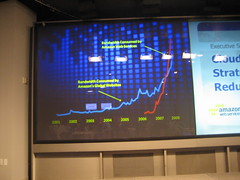 On a typical product page on Amazon (say for a book), Amazon pulls 200-300 services to generate the page. Each service is managed by an Amazon employee and Amazon gives them the flexibility to build in the language and tools that best fit the needs of the service. 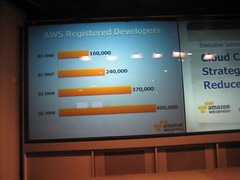 One of the interesting examples Werner provided came from the New York Times. They wanted to put all of their old editions online but didn’t want to utilize their current TIFF files as they were very large in size per page. They wanted to use PDF files instead. They had to convert 4TB of data and internally they looked at using 6 servers and a lot of hours of development. By using AWS, they got the project fully completed in a weekend and it cost $25 in EC2 processing and S3 storage.

Check out all of my event photos on Flickr.