TweetDeck vs. Seesmic – My Opinion

There are a handful of various desktop applications that can be used to track Twitter on your computer. In this article, I will be comparing two of those applications: Seesmic Desktop and TweetDeck. For the purposes of this review, I am using TweetDeck 0.6.2 and Seesmic Desktop 0.2.1.

On the surface, both applications are very similar. Listed below are some of the general features you’ll find in both TweetDeck and Seesmic. 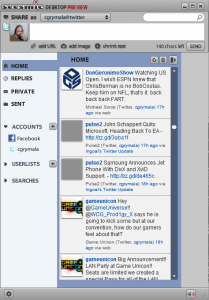 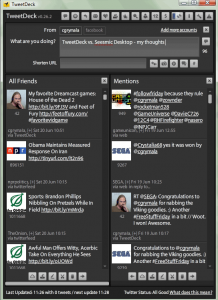 Following are the features available through TweetDeck that are not yet found in Seesmic Desktop:

Now, I’ll try to outline some of the differences between the two and some of the features I’d like to see that aren’t available in either:

Personally, I prefer the interface of Seesmic Desktop over the TweetDeck interface. However, the feature set currently available in TweetDeck offers more of the functionality I want, so I’m working mostly within TweetDeck. The number one feature that would absolutely need to be added to Seesmic Desktop before I would consider switching is the short URL preview. I also would want Seesmic to introduce the auto-complete usernames and auto-include hashtags. I must admit that I also am becoming a big fan of the fact that I can sync my TweetDeck columns between platforms (as long as I sync them with my iPhone, I can also sync them between Linux and Windows and between my work and home computers – which is really cool).

That said, if TweetDeck introduces a way to comment on Facebook updates and a way to resize the columns (automatically and/or manually), I would probably stop considering switching to Seesmic Desktop.

As a final word, I will issue this minor warning: If you use TweetDeck and Seesmic Desktop at the same time (as I did while writing this review to allow for easy comparison), you will most likely run out of Twitter API calls before the hour is up (I ran out about 15 minutes early).